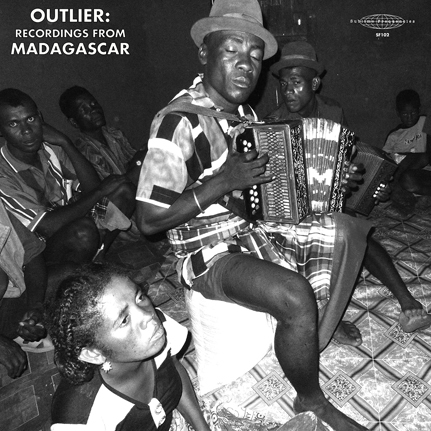 This collection is an impeccable and crystalline assortment of beautiful music from the deep southwestern provinces of Menabe and Tulear in Madagascar, recorded and assembled by Charles Brooks. Charles has made many friends in these lesser-travelled regions over the past 20 years. Outlier: Recordings from Madagascar represents a compilation of his more recent encounters (2011-2012).

“Madagascar is an island that would bleed into obscurity if not for the rhythm of its name and the mysterious tailwind that follows it. Filled with natural wonder, it’s a land where places, conversations, and names are spoken with a liquid tongue, where people and setting come together to create a unique array of music and culture. Sites can become extraordinarily charged with an unseen presence where heavy air, summoned spirits, and a transformative energy collapse natural constraints of place. The Malagasy call this mingling of forces ‘maresaka’—a permeating vibrational aura. Maresaka pulls you in and places you in the moment, to participate through a saturation of sounds, smells, and colors. When caught inside this kind of atmosphere, levity comes; you release your anchors of self-control. Beautiful unfettered music surfaces. Here, that is to say where I’ve been brought to listen, music lives and moves.

The artists represented in this compilation play, and their music has many different roles—both natural and supernatural. Music can be performed as much as it can be recorded, but here it’s mostly played. These exceptional artists share within such practice."

Limited Edition LP comes with full-size insert of text and photographs by the compiler Charles Brooks.