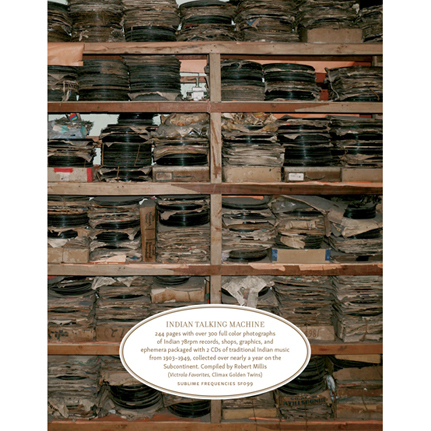 One of the earliest non-Western outposts of the "recording industry", the first recordings were made in India in 1902. This makes perfect sense as Indian music is as beautiful as it is complex, as subtle as it is profound and as divine as it is simple. Accompanying the over 300 photographs are two CDs of music from shellac discs spanning the years 1903 to 1949 collected in India and compiled by the author; virtuoso instrumental recordings, jaw dropping vocal renditions, folk music, comedy recordings, even animal impressions, none of which have ever been issued in digital form. The 78rpm records were transferred by Jonathan Ward (Excavated Shellac) and mastered by Grammy award winning engineer Michael Graves (Analog Africa, Dust-to-Digital, Hank Williams Garden Spot Recordings, and more).

Indian Talking Machine is a personal take on the vast worlds of Indian music and the intricacies of collecting sound.