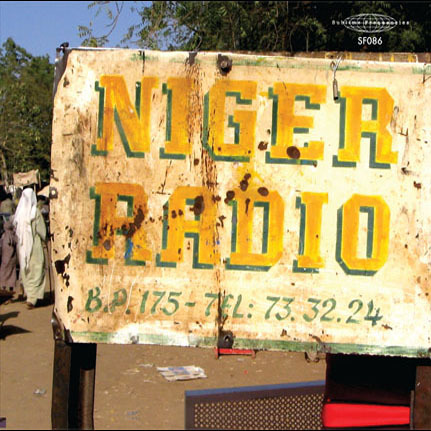 Although it’s one of the poorest nations on the planet in terms of the UN’s Human Development Index, Niger has one of the most diverse and richly ornamented cultures on the African continent. The country’s first station, Radio Niger, went on the air in 1958 and was renamed Voix du Sahel in 1974. In 1979, the government established the Broadcasting Corporation of Niger State (BCNS).

Today, Radio Niger is where the country’s range of ethnicities, with their disparate customs of language and music, combine to create an astonishingly complex sonic patchwork: Bawdy, drunken sages and storytellers wandering into the studio; local shout-outs to girlfriends and family members; comedy skits juxtaposed with Zarma/Songhai mollo (a regional stringed instrument) and Denke-denke mollo from neighboring Burkina Faso dissolving into Tuareg guitar blues trance. News snippets from RFI and the BBC vie for supremacy with Hausa women's ensembles; Malian Kora collides with Zarma Koranic transmissions; lo-fi cassettes from the marketplace bump up against animist Bori folk dirges and the vapid autotune stylings of modern Nigerian pop. DJs bring an improvisational element to local radio: singing along with tracks live on air; creating live multichannel compositions and avant-collage cutups; and generally preserving the human element that has long since disappeared from corporate western radio. In short, Radio Niger is outlaw radio, broadcast with freedom and spontaneity, and bathed in an arid fidelity that reveals the region’s character and landscape.