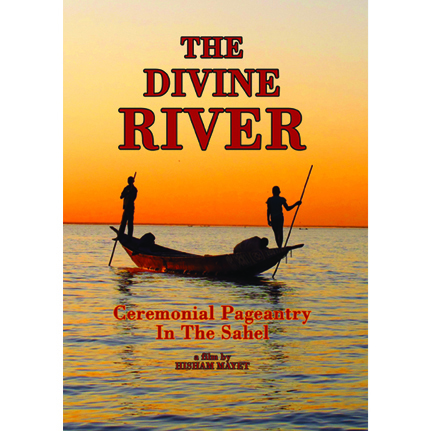 DVD - The Divine River: Ceremonial Pageantry In The Sahel SF075

Sublime Frequencies announces a new film by Hisham Mayet: The Divine River: Ceremonial Pageantry in the Sahel. Condensed from 40 hours of footage shot between 2007 and 2012, The Divine River is an exhilarating, hallucinatory, harrowing record of music, ritual, life and landscape along the Niger River—which the Tuareg call Egerew n-Igerewen, or "River of Rivers"— as it winds through Mali and the Republic of Niger.

Traversing 300 miles of this transitional zone between the Sahara and the Savanna, The Divine River is not a linear record of a journey so much as a phantasmagoria of visual associations that create their own emotional topography and chronology, always accompanied by music that blurs the lines between sacred and secular, past and present.

Highlights include intimate views of ecstatic dance in the painted houses of the island-dwelling Wogo; the seductive courtship rites and trance vocals of young Wodaabe men; a mesmeric Tuareg and Zarma duet for guitar and molo; Hausa griots enchanting with comsaa strings; Zarma spirit possession ceremonies; and heart-stopping footage of the Dogon mask ritual atop the Bandiagara Escarpment in the village of Endele.

True to Sublime Frequencies' "aesthetic of extra-geography and soulful experience," The Divine River refuses hasty contextualizations and rote interpretations that, far from "explaining" cultural displays, deaden viewers to the presence of mystery. Avoiding the temptation to reduce ritual to a simple matter of ends and means, its silence respects the chasm that separates concepts like "possession" from their lived reality. Rejecting the distractions of an imaginary understanding in favor of simple attention and humility, it traces the portal to deeper knowledge counseled in a centuries-old Sufi prayer: "O Lord, increase my bewilderment."