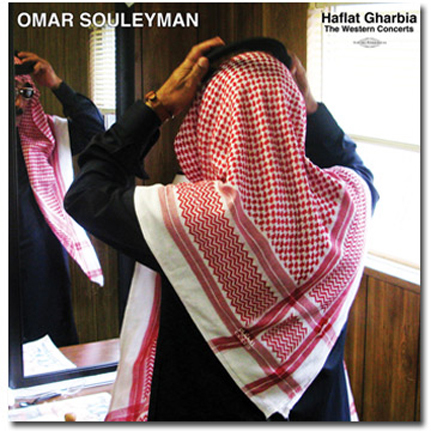 Omar Souleyman is a folk-pop singer from rural northeastern Syria. Like many Syrian musicians, he made his name as a singer for wedding parties in the region, with hundreds of cassettes and CDs documenting his performances distributed throughout the country. These, along with several studio albums, earned him legendary status in the Syrian dabke scene throughout the 1990s and early 2000s. After his 2005 breakthrough folk-hit Khataba, Omar gained wider recognition throughout the Arab world.

After collecting his tapes for a decade, Sublime Frequencies released the first compilation of Omar Souleyman tracks to be distributed in the West. The success of Highway to Hassake (2007), and the enthusiastic online reaction to the promotional clip for his track Leh Jani, led to Omar being invited to tour the UK and Europe in the summer of 2009. It would be his first time performing or travelling outside of the Arab world.

He and his group, comprised of two longtime collaborators – Rizan Sa'id on keyboards, and electric saz player Ali Shaker - set off on a six-week Sublime Frequencies tour with label-mates Group Doueh. By the end of 2009, Omar had proven that his unique and charismatic delivery of Syrian electrified folkloric dabke, Iraqi choubi and Arabic shaabi had the ability to appeal to the most diverse of western audiences. His success has continued, with further tours throughout Europe, America and Australia drawing rave reviews and leaving a trail of fervor across the globe.

The rise of Omar's success has transcended the wedding halls and cassette stalls of Syria and slipped into western popular consciousness. Despite there being no shortage of musical talent in Syria, dabke and otherwise, Omar Souleyman is the first Syrian musical export to have won the hearts of westerners and Arabs alike on this scale. His trademark checkered khaffya, sunglasses and elegant jalaba are not uncommon male attire in the Arab world, but for years in the west, it is that exact image which has been excessively demonized. Perhaps one of the most striking achievements of Omar's rise has been watching that iconic image transformed from comic book villainy to something positively regal.

The recordings on Haflat Gharbia – The Western Concerts, Omar Souleyman's fourth release on Sublime Frequencies, represent an hour of the best moments from the western tours between 2009 and 2011, captured in striking fidelity and intensity. Fans will recognize familiar songs, as well as previously unreleased material presented here for the first time, in what is the biggest sounding Omar record yet.