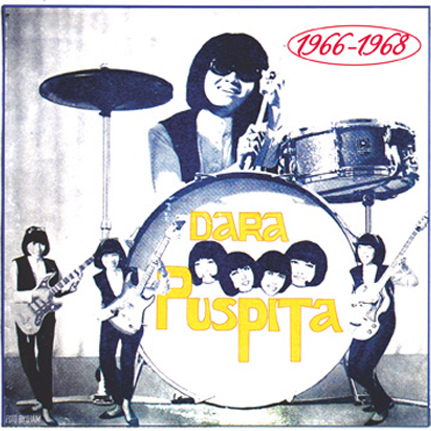 Dara Puspita (Flower Girls) was arguably the world’s greatest all-female garage rock band. The reason you’ve probably never heard of them was that they came from Indonesia where they were extremely popular during the 1960s. Their career spanned from 1965 until 1973 including 3 years (1969-1971) living and touring in Europe. The four albums recorded by the original members between 1966 and 1968 (the material represented on this CD) is one of the great chapters of 1960s popular music history never to be reissued, let alone recognized beyond a few tuned-in souls and adventurous record collectors in the Western world. Twenty-six of their most spectacular tracks (from the albums Jang Pertama, Special Edition, Green Green Grass, and A-Go-Go) are now finally available to hear in this essential release.

Dara Puspita formed in their hometown of Surabaya in 1964. After relocating to Jakarta, the group began to create quite a stir with their wild stage shows. Their local performances were attended by teenagers grooving to the band’s raw garage rock sound. The first all-female Indonesian pop group that could play their instruments and sing, Dara Puspita also attracted the attention of Indonesian president Sukarno who labeled Western rock music “a form of mental disease”. In 1965 (an eventful and critical year for the group), the girls endured a month long interrogation by the government for performing “outlawed” rock and roll music, became the house band in a Bangkok nightclub for three months, and were introduced to Dick Tamimi of Mesra records, the man who would launch their recording career. The tracks featured in this compilation were recorded at the height of Dara Puspita’s popularity during the immediate post-communist era of General Suharto’s new order; a time when Indonesia’s musicians and artists were finally capable of launching their own creative renaissance.

This collection is guaranteed to appeal to all fans of the beat a-go-go era of the mid-late 1960s and is a significant missing piece of the global pop music history puzzle. Every single track is a classic, the sound quality is superb, and it should only take one listen to become completely addicted to and charmed by this legendary Indonesian group.