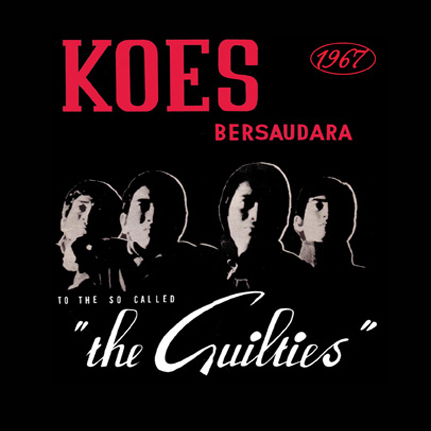 This CD features the first ever reissue of Koes Bersaudara’s two extremely rare and almost impossible to find albums from 1967 - To the so-called “The Guilties” (12 song full-length LP) and Djadikan Aku Domba Mu (8 song 10-inch LP). Guilties has long been considered by Indonesian music historians as their nation’s legendary garage rock masterpiece as well as the first record to directly challenge or speak out against the Indonesian government. Recorded live in the studio in a few hours, the album is laced with a raw, guitar-driven sound that forays into previously unexplored realms of the mid-sixties beat generation. Though Guilties is obviously inspired by Western bands of the period, the record possesses a unique feel throughout and will challenge you to find obvious derivative Western sources (with the exception of the Byrds guitar style on Apa Sadja). Djadikan Aku Domba Mu was actually recorded a few months before the Guilties album and has a much dreamier feel overall. Some of the tracks are more psychedelic and reminiscent of the ballads the Koeswoyo brothers would create at the end of the 1960s. Also included in this set is the extremely rare studio outtake Land of Evergreen, the only cut in this collection that was recorded in stereo. One of 4 tracks on this CD sung in English, Land of Evergreen features an absolutely stunning guitar intro and is one of the best songs Koes Bersaudara ever created.

Koes Bersaudara (Koes Brothers) formed in Jakarta in 1960. At the beginning, the group consisted of 5 Koeswoyo brothers – Jon, Tonny, Nomo, Yon and Yok. After their first album was released in 1964, older brother Jon quit reducing the group to a four-piece. Tonny (lead guitarist and songwriter) was the leader of the group with Yon (rhythm guitar) and Yok (bass) handling the vocals along with Nomo on drums. By 1965, the group started to grow their hair longer, wore high-heeled leather boots, and added Beatles’ songs to their stage show. President Sukarno began waging war against the influence of Beatlemania which had taken hold of the Indonesian popular music scene. Koes Bersaudara was arrested and spent 3 months in prison for performing a Beatles song at a private house party. They were released from jail at the same time General Suhuarto launched his military coup and former restrictions on Western pop music began to be lifted. By 1967 Koes Bersaudara was back in the studio recording what would become their most challenging music on Dick Tamimi’s Mesra Record label. Nomo left the group in 1968 and after Tonny, Yon and Yok found their new drummer Kasmuri (Murry), Koes Plus was born in 1969 and became the most popular Indonesian band of the 1970s. These reissued tracks have been coveted by serious “in the know” collectors worldwide for decades and will surely appeal to all fans of the pop and rock era of the mid-late 1960s as a significant missing piece of the global pop music history puzzle.