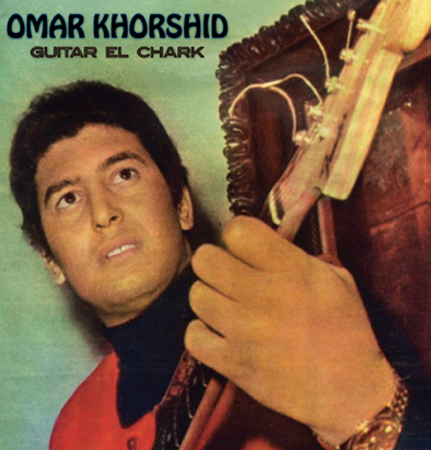 The late Omar Khorshid remains an iconic legend of the Arab world, though he’s received criminally little international acclaim. Born in Cairo in 1945, the glittering age of Egypt's cultural reinvention, Khorshid was soon to become one of its luminaries and most well-known, if short-lived, voices. He is regarded as the greatest guitarist the Arab world has ever known. By the mid 60s Khorshid was established with his group Le Petit Chats, an Egyptian beat group modeled after the prevailing influence of Elvis and the Beatles. It was at this time that one of the reigning figures of contemporary Arabic music, Abdel Halim Hafez, asked Omar Khorshid to join his orchestra. With Baligh Hamdi composing, Hafez with Khorshid in place would create some of the most innovative modern sounds in the Arabic musical canon.

Time with the Hafez orchestra offered Khorshid instant fame, and it wasn’t long before he was asked to play with the queen of Arab music, the voice of Egypt herself -Oum Kalthoum. Over the next few years Khorshid became a well-established and integral part of the Arab musical landscape. He was featured heavily in live concerts, national TV and radio and studio recordings, playing for the leading artists of the day. The guitar had now become an essential ingredient in the Oriental orchestra.

Khorshid began recording albums under his own name for the prestigious Lebanese record labels Voice Of The Orient and Voice Of Lebanon. Working with visionary engineer Nabil Moumtaz at Polysound studios in Beirut, Khorshid would take his music into some of the most progressive musical terrain of its time. The tracks included here in this retrospective are from the prolific span of Khorshid’s career in Beirut from 1973 to 1977. The venerable Palestinian poet Mahmoud Darwish best encapsulated this time in Lebanon: “unfortunately, it was paradise”.

Khorshid’s prolific instrumental music enjoyed recognition that transcended class and status during the brief period he shone. It’s a testament to his immense talent and some of the finest guitar music the world has ever heard.

Double CD is a reissue of the out of print vinyl addition. With an additional ten bonus tracks and a 14 page booklet in a tri-fold digipak.