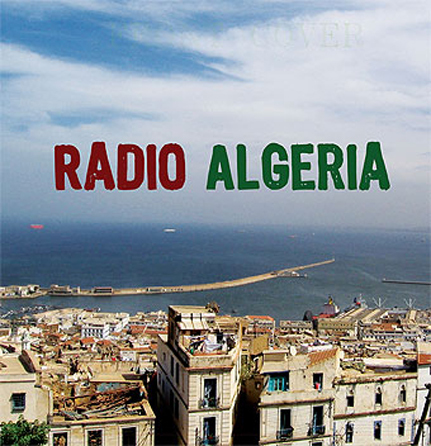 Radio Algeria is a multi-dimensional assembly of audio culture from the Mediterranean coast to the undefined border areas of the Sahara Desert and beyond. This is perhaps the most diverse collection of the Algerian listening experience ever presented featuring raw Berber folk, modern Arabic pop, sacred Islamic traditional, Andalusian orchestral, Guesba (the origin of Rai), classic early Rai, Khabyle, Tuareg, Saharaui, and hybrid music styles influenced by Europeans to the north and sub-Saharan Africa to the south. The presence of French culture is a relevant factor in some of these tracks as modern history would suggest and the language is still spoken by a large portion of the population. No English is spoken on Algerian-produced radio. Collected, assembled and edited in 2005 from AM, FM, and Shortwave broadcasts recorded in Algeria, there are radio finds here that defy categorization. Excerpts of bumper music, DJ announcements, advertisements, and radio station Id’s reinforce the transitions between the musical segments throughout this production.