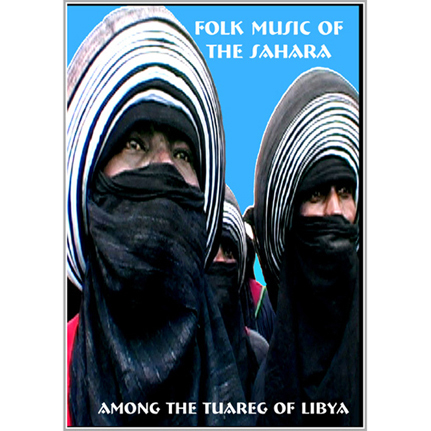 DVD - Folk Music of the Sahara: Among the Tuareg of Libya SF010

Folk music of the Sahara is an intoxicating experience of sight and sound captured among the Tuareg and Libyan people of North Central Africa. Filmed from the perspective of actually being one of the performers, this mind-blowing IN YOUR FACE document captures the spirit of Libyan folklore and the essence of emotion armed with pounding rhythms and wailing vocal choruses. Both men and women are featured here equally as overseers of the hybrid forms of expression where central African traditions collide with the tones and colors of the Arab world creating one of the most unique overviews of Saharan folk music ensemble and dance the outside world has ever witnessed. The diversity of faces is extraordinary, every costume is stunning, and the women are among the most beautiful on earth. If you ever wondered where some of western music’s more exotic ideas originated from ( Sun Ra’s Arkestra/call and response choruses/ trance drumming/ and even some forms of modern hip-hop) this is a great place to start!