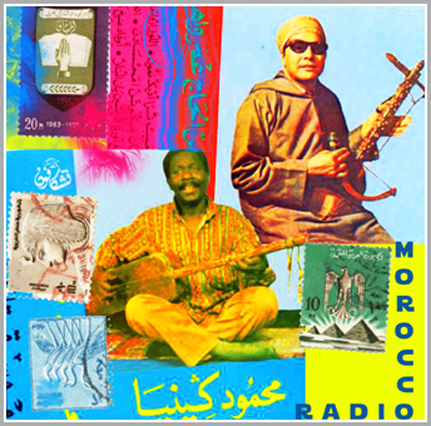 It was the summer of 1983 in Morocco. The Polisario guerillas were operating in the Southern Sahara and the mood was tense in the Arab world. The Government of King Hassan was suspicious of anything out of the ordinary. Checkpoints were everywhere along the highways. Aids was the new disease. The American entertainment industry was grinding Michael Jackson's THRILLER into the world conciousness as US export culture supreme. Dr. J won his first and only NBA Championship ring. I knew all this from the small transistor radio I carried from Tangier to Marrakesh. I rented an apartment in Essouira on the Atlantic coast and began my swan dive into international radio collage. A songwriter by the name of Younes Megri had the number one hit during the summer of 1983 in Morocco. Radio Tangier International had the strongest signal in Northwest Africa.

They played everything from Euro-pop to Be-bop to Heavy Rock to Moroccan folk trance. Less-powerful stations played berber folk music late into the night. This collection is 20 years old and has grinded into my skull as Moroccan export culture supreme. This is some of the greatest music ever known displayed here amidst snippets of news, commercials, radio noise and a host of otherwordly transmissions. Arabic music is HIGH ART. At its best, it transcends western music even as it utilizes it as a display of emotion and celebration. The Moroccans are deep contributors to the high art of Arabic music. May this disc download into your mind as an anti-virus. It worked for me. I don't even remember THRILLER by Michael Jackson.