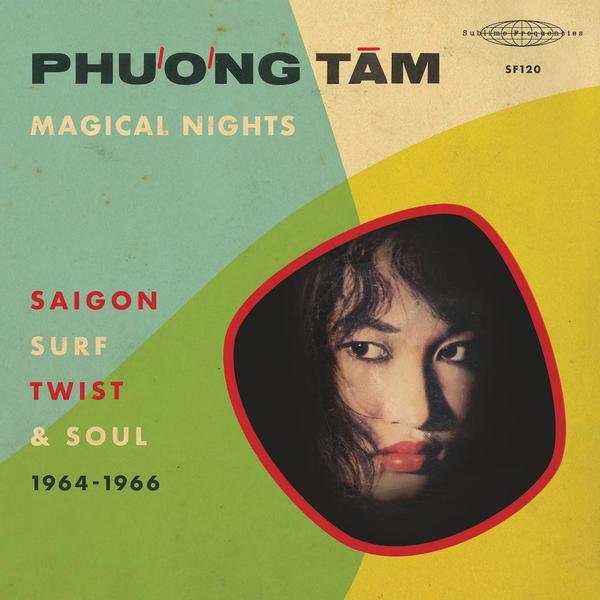 CD available and in stock.
2xLP version is a pre-order for USA customers . Repress orders will ship mid-December 2022.
International orders are shipping now.

Sublime Frequencies is honored to present the first ever retrospective of Phương Tâm, the
groundbreaking Saigon teenager who became one of the first singers to perform and record rock and roll
in 1960s Vietnam.
By chance in early 2020, Hannah Hà (USA) learned that her mother, Phương Tâm, had once been a
famous young singer, performer and recording artist at the heart of Saigon’s music scene in the early 1960s.
The family had heard some mention of their mom as a singer at the time, but the extent of her legacy and
the many songs she had recorded came as a big surprise. Further investigations soon led Hannah to
producer Mark Gergis, compiler of Saigon Rock and Soul (2010, Sublime Frequencies), enlisting him to
join her on a journey of discovery and recovery. The result is this essential document of Phuong Tam’s brief
but prolific career, and at the same time, reuniting the long-lost music with its singer.
The unique strengths and qualities of Phương Tâm’s voice, coupled with her commanding stage presence,
had swiftly elevated her to top billings on Saigon’s nightclub stages. Parallel to the brutality and uncertainty
of an already protracted war, South Vietnam’s music and recording industry were developing at a rapid
pace in the early 1960s. Globally, musical trends with wild, ephemeral dance crazes were being thought up
weekly; the twist, hully gully, the mashed potato – none of them a problem for Phương Tâm. She soon
caught the attention of Saigon’s leading recording companies and composers (Y Vân, Khánh
Băng, Trường Hải, Thanh Sơn, Y Vũ and Mặc Thế Nhân, among others). Her energy translated
unsurprisingly well in the studio, backed by electric guitars, contrabass, drums, lush brass sections,
saxophone, piano, organ and rich backing vocals.
Between 1964-1966, Phương Tâm would record almost 30 known tracks, released by the three main record
companies in Saigon. The teenage starlet became a vital centerpiece of pop music of the time, and one of
the very first singers to perform and record rock and roll (known locally as nhạc kích động, or, action music)
– though as you’ll hear, she could also transform a jazz ballad into something otherworldly. While these
musical styles were undeniably influenced by contemporary trends worldwide, the musicians and
composers worked to localize the sounds, incorporating linguistic adaptations, lyrical content and past
artistic traditions into something all their own.
In 1966, as Saigon’s music scene continued to evolve and escalate, Phương Tâm walked away from her
singing career without looking back – marrying the man she loved and beginning the next rich chapter of
her life. But her recorded output had laid the stylistic groundwork for the following generations of singers,
and many of the songs she first sang would later be further popularized by others. Her impactful, but shortspanning
career has seen her legacy remain historically understated until now.
Due to the lack of master tapes or documentation from pre-1975 Vietnam, and the scarcity of records and
tapes that had survived the war, it was difficult to grasp the extent of Phương Tâm’s discography. A
collective effort was required in sourcing materials and information to compile this record, involving key
collectors and producers internationally (Jan Hagenkötter - Saigon Supersound, Cường Phạm, Adam
Fargason, Khoa Hà – granddaughter of composer Y Vân, and researcher Jason Gibbs). As the veils of
history were slowly lifted, the genuine thrill was witnessing Phương Tâm herself, hearing these songs for
the first time in over 50 years – sometimes since the day she recorded them.
At the heart of this project is a family story – Hannah Hà’s dedication to recovering and sharing her mother’s
musical legacy is helping put Phương Tâm back on center stage after 55 years. But it is also a story that
adds critical context to the fragmented understanding of Vietnamese popular culture during the 20th
century, particularly after so much has been lost to war and dislocation.
The album features 25 tracks, restored and remastered from original records and reel tapes. The deluxe
CD release comes housed in a 6-panel digipak, with two 32-page booklets in English and Vietnamese,
featuring extensive liner notes by Hannah Hà and Mark Gergis, exclusive photos, album and sheet music
art, original magazine and newspaper extracts, nightclub advertisements + more. Digital version is
accompanied by a 41-page pdf booklet. Vinyl release forthcoming in 2022.

- First ever retrospective of Phương Tâm, the groundbreaking Saigon teenager who became one of the
first singers to perform and record rock and roll (known in Vietnam as nhạc kích động, or, action music).
- 25 tracks spanning Phương Tâm’s recording career: early rock and roll, surf, twist, soul, blues and jazz
ballads recorded in Saigon between 1964-1966, featuring electric guitars, contrabass, lush brass,
saxophone, drums and organ, and rich backing vocal arrangements.
- Produced by Mark Gergis (compiler of Sublime Frequencies’ 2010 compilation Saigon Rock and Soul)
and Hannah Hà (daughter of Phương Tâm).
- Audio restored and remastered from original records and reel tapes.
- A family story – as told by Hannah Hà, whose dedication to discovering and sharing her mother’s musical
legacy, is helping to put Phương Tâm back on center stage after 55 years,
- Adds critical context to the fragmented understanding of Vietnamese popular culture at the time.
- First western-issue single-artist retrospective of a pre-1975 Vietnamese artist.