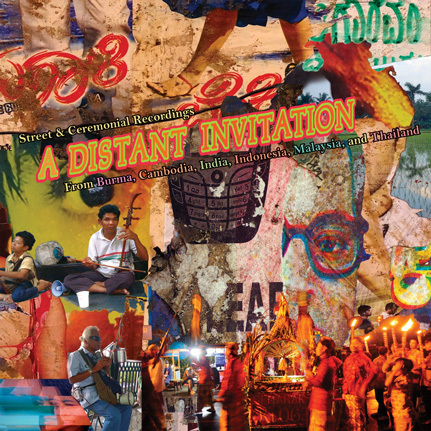 “We heard them from a distance, bells in the back alleys of Surakarta...Then, one day, two weeks later, we walked around a corner and there they were, a troupe of roving gamelan musicians and a monkey with a mask...If one wanders the streets of Southeast Asia, they will undoubtedly hear a variety of fascinating sounds; those created by street musicians, sellers in markets, horns from Temples and Mosques, woven with insect songs, birds, dogs, motorcycles…Intended to engage and entertain a host of spirits and gods, festivals and processions are frequent in certain regions. They can be extremely vibrant and overwhelmingly powerful energy situations. In rituals, the use of random multiple layers or instrumental vibrations can be intended to confuse or scare off bad spirits, and this can be very disorienting for the living listener also. Street musicians combine older instruments with electrical delivery systems in the form of genius portable battery-operated-waist-pack mini horns connected to keyboards, karaoke machines, and folk instruments - sometimes with effects. These musicians sit roadside; in some places they hop on buses between stops. In markets and along roadsides, sellers manipulate their voices to advertise using delay effects. Food cart proprietors use an incredible array of sonic methods to attract customers. They tap on objects, use steam whistles; sing like birds, use bits of western jingles (and much more). Buddhist, Hindu, and Muslim broadcasts can be heard blasting through loudspeakers. With the addition of amplification, there is usually some form of distortion inherent to the speaker systems, often magically enhancing the voices, mixing in with the urban or rural soundtrack. The sonic tapestry of any space can reveal poetic insights. There is the perspective that all audio events in an environment, regardless of their form, can be heard musically. The vitality and depth of human expression, whether awe inspiring or minute in all of its multitudinous manifestations, is for now, intact in Southeast Asia, and very much alive.”
- Jesse Paul Miller