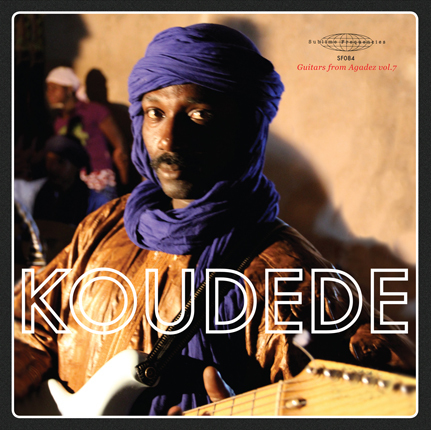 In October 2012, the Tamashek community lost one of its most luminous voices when Koudede's life was cut short by a car crash during his trip home to Niger from Ouagadougou, Burkina Faso.
Koudede was a leading light among the myriad musical groups that have recently proliferated in Niger and Mali to voice the Tuareg struggle against exploitation and to exalt their proud but waning nomadic heritage.

His outstanding reputation and corpus of songs garnered the respect of his contemporaries, and his altruistic persona made him a formidable conduit for younger generations of musicians; he was always eager to foster dialog by spreading the music and message of his people.

These recordings were captured in an atmosphere of tumult as the 2012 Tuareg insurgency led to a series of battles in the northern Sahara between the government of Mali and the National Movement for the Liberation of Azawad (MNLA). In a misbegotten alliance, the MNLA was drawn together with a rogue movement of dogmatic fundamentalists who were bent on destabilizing West Africa’s generally symbiotic relationship with a peaceful, centuries-old Afro-Islamic culture.

Three of these four tracks were recorded on location at Toumast — the Tuareg headquarters in Mali’s capital city of Bamako — shortly after Koudede appeared as a featured artist at the Festival au Désert in Timbuktu. In February 2012, as conditions worsened for the Tuareg in Mali, Koudede’s peers advised him to flee the country. The remaining track was recorded in Ouagadougou, after Koudede and his group left Bamako for the safer soil of Burkina Faso.

These recordings showcase Koudede's mastery of song and emotion, and memorialize his tragically short tenure as one of the Tuareg's most venerable prophets of the Kel Tamashek message to the outside world. Sublime Frequencies is honored to perpetuate Koudede's extraordinary legacy with this four-song, 45-rpm 12" EP. Recorded and compiled by Hisham Mayet.