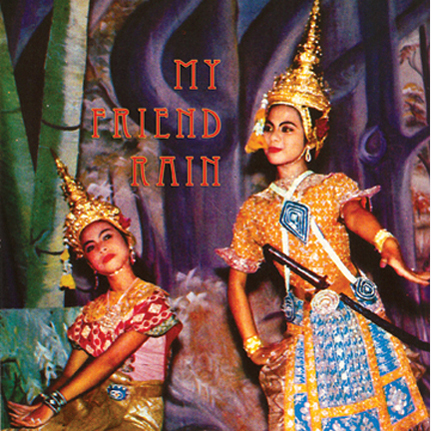 Filmed throughout Southeast Asia by Robert Millis between 2002-2004, My Friend Rain is an abstract homage to the endless monsoon cycles of rebirth and destruction. Dreamy musical segments, fleeting glimpses, odd sounds, temple shrines, tropical backdrops, decay, death, languid afternoon rains, and mysterious celebratory events take the viewer from soaked mornings in the lowlands of the Irrawaddy delta to humid nights on the streets of Isan province. Two tracks originally released on Millis’ Leaf Music, Drunks, Distant Drums CD from 2002 can now be witnessed for the first time in this film: an amazing elephant mahout playing a song on a leaf with his mouth and a Burmese marionette orchestra musician performing expertly on tuned drums. The overall experience is an impressionistic collage of sight and sound captured live and in the moment on location in Laos, Thailand, Cambodia and Myanmar. Along with the DVD which features 12 minutes of extra footage and deleted scenes, the package includes a bonus CD with the film’s soundtrack of traditional and popular music culled from live performance, cassette and LP archives. Some of the soundtrack highlights: a gorgeous Thai Luk Thung track by Waiphot Phetsuphan, a classic Khmer performance by Pan Ron, one of the Queens of Cambodian music, and an epic Burmese pop rendition of the Bee Gee’s How Do You Mend a Broken Heart, alongside folk performers, street musicians and a traditional Burmese orchestra. Robert Millis, original co-founder of both Climax Golden Twins and AFCGT, also co-produced the Victrola Favorites Book/CD project on Dust to Digital and is a frequent contributor to the Sublime Frequencies label.

DVD/CD comes in a 2-disc jewel box with full-color insert.