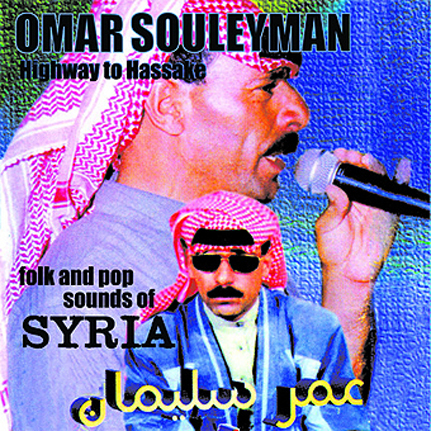 Omar Souleyman is a Syrian musical legend. Since 1994 he and his musicians have emerged as a staple of folk-pop throughout Syria, but until now they have remained little-known outside of the country. To date, they have issued more than 500 studio and live recorded cassette albums which are easily spotted in the shops of any Syrian city. Born in rural Northeastern Syria, he began his musical career in 1994 with a small group of local collaborators that remain with him today. The myriad musical traditions of the region are evident in their music. Here, classical Arabic mawal-style vocalization gives way to high-octane Syrian Dabke (the regional folkloric dance and party music), Iraqi Choubi and a host of Arabic, Kurdish and Turkish styles, among others. This amalgamation is truly the sound of Syria. The music often has an overdriven sound consisting of phase-shifted Arabic keyboard solos and frantic rhythms. At breakneck speeds, these shrill Syrian electronics play out like forbidden morse-code, but the moods swing from coarse and urgent to dirgy and contemplative in the rugged anthems that comprise Souleyman's repertoire. Oud, reeds, baglama saz, accompanying vocals and percussion fill out the sound from track to track. Mahmoud Harbi is a long-time collaborator and the man responsible for much of the poetry sung by Souleyman. Together, they commonly perform the Ataba, a traditional form of folk poetry used in Dabke. On stage, Harbi chain smokes cigarettes while standing shoulder to shoulder with Souleyman, periodically leaning over to whisper the material into his ear. Acting as a conduit, Souleyman struts into the audience with urgency, vocalizing the prose in song before returning for the next verse. Souleyman’s first hit in Syria was "Jani" (1996) which gained cassette-kiosk infamy and brought him recognition throughout the country. Over the years, his popularity has risen steadily and the group tirelessly performs concerts throughout Syria and has accepted invitations to perform abroad in Saudi Arabia, Dubai and Lebanon. Omar Souleyman is a man of hospitality and striking integrity who describes his style as his own and prides himself on not being an imitator or a sellout.

Sublime Frequencies is honored to present the Western debut of Omar Souleyman with this retrospective disc of studio and live recordings spanning 12 years of his career, culled from cassettes recorded between 1994 and 2006. This collection offers a rare glimpse into Syrian street-level folk-pop and Dabke– a phenomena seldom heard in the West, not previously deemed serious enough for export by the Syrians and rarely, if ever, included on the import agenda of worldwide academic musical committees.

The 2-LP edition and comes in a gorgeous full color gatefold sleeve with photos and text by Mark Gergis.