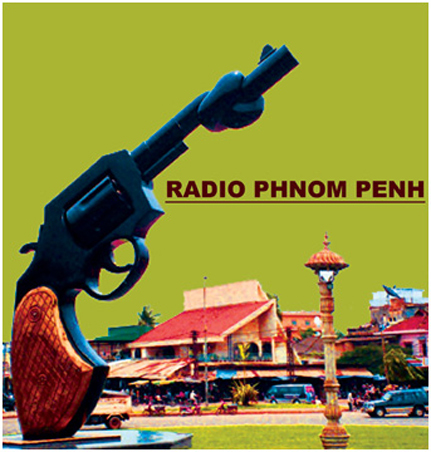 Cambodia’s people, economy, and culture have been “re-mixed” perhaps more than any place on earth for the past 50 years. The name was even changed to Kampuchea and then back again to Cambodia. So it almost seems natural that modern Cambodian record companies have been re-mixing the old classic pop and rock tracks from the pre-Khmer Rouge era, overdubbing drum tracks, and sometimes all instruments leaving only the original vocal in tact. These re-mixes, designed to hold the interest of younger listeners, are the staple for current programming on Phnom Penh’s FM radio stations as the AM flagship “National Radio of Cambodia” remains the only source regularly featuring the original master recordings.

This brain-melting concoction of Radio transmissions is a combination of AM/FM samples from the airwaves of Phnom Penh. The older, classic Pop/Rock FM cuts are ALL re-mixed versions while the newer forms/other styles of Cambodian music collected here are not. All AM recordings are from the Original masters. Regardless of the debate between “original” and “re-mix”, this is the most diverse assortment of Cambodian musical treasures you’ve NEVER heard. Flowing from traditional to Modern, from rock and pop to folk and hybrid, all excerpts are as unique as the best of what’s been presented by other compilations of late. And it’s sequenced here in the spirit of how it was captured: as radio programming designed to immediately transport you into the heart of Cambodia’s Capital.